6 times RBG taught us how to fight for gender equality

RBG was a crusader for social justice and gender equality. She fought tirelessly for equal rights throughout her entire career — especially for women. And, she inspired millions to fight sexism and discrimination in America.

She was fierce, but patient. She was a dissenter. She was the Notorious RBG.

While her loss is devastating, her legacy will live on. It has to. Because while RBG made an incredible impact over the decades, there is still a lot of work to do.

Here are six RBG quotes on gender equality to light a fire in each of us. Because we need to keep up the fight. For Ruth, for the next generation and for all of us. 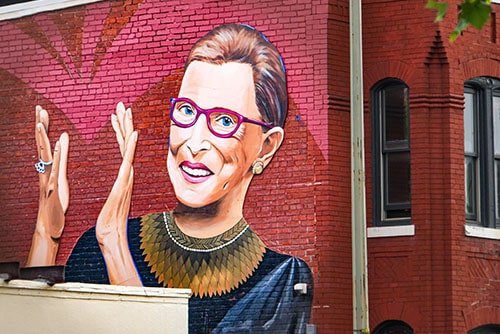 1. “The pedestal upon which women have been placed has all too often, upon closer inspection, been revealed as a cage.”

2. “Real change, enduring change, happens one step at a time.”

3. “Women belong in all places where decisions are being made. It shouldn’t be that women are the exception.”

4. “Women will have achieved true equality when men share with them the responsibility of bringing up the next generation.”

5. “When I’m sometimes asked when will there be enough [women on the Supreme Court] and I say, ‘When there are nine,’ people are shocked. But there’d been nine men, and nobody’s ever raised a question about that.”

6. “Fight for the things you care about, but do it in a way that will lead others to join you.”