Water. We can’t live without it.

But nearly a billion people around the world don’t have access to safe drinking water. And the consequences are deadly. Every day children die from preventable waterborne illnesses. Diarrhea is a leading cause of death for children under the age of 5, with contaminated drinking water causing more deaths than HIV/AIDS and malaria combined.

Water scarcity is a daily reality for millions of families, and the burden of finding safe drinking water typically falls to women and girls, who spend hours a day traveling to the nearest water source. The journey is long and dangerous, putting them at risk for sexual violence or harassment. Many are forced to miss school, falling behind in their studies. And despite all that time and effort, the water they collect is often contaminated and unsafe. 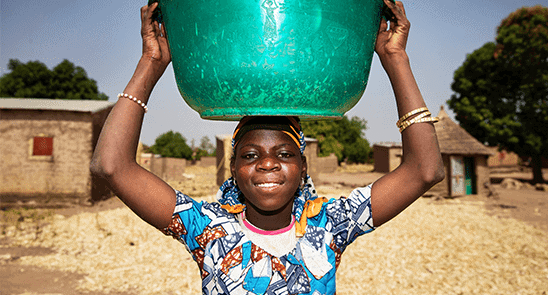 Procter & Gamble has been committed to fighting the world water crisis since 2004. Since establishing the P&G Children’s Safe Drinking Water Program, P&G and its partners have provided more than 16 billion liters of clean water to vulnerable children and families in the developing world.

The P&G Purifier of Water, developed in collaboration with the U.S. Centers for Disease Control and Prevention, is a powdered mixture that removes 99.999% of bacteria, 99.99% of viruses and 99.9% of cysts (parasites). The packet purifies even heavily contaminated water, so that it meets World Health Organization standards for safe drinking water.

In 2018 P&G partnered with Plan International to bring the Children’s Safe Drinking Water Program to Nigeria, a country where 71 million people do not have access to clean water, and 130 million lack access to basic sanitation services. The situation is most dire in northeastern Nigeria, where violence and political unrest have displaced millions of families. Living in cramped shelters and camps, the sanitation conditions and health hazards are severe, especially for young women and children.

The Children’s Safe Drinking Water program has already reached 250,000 children and families in shelters, camps and communities in northeastern Nigeria, providing purification supplies, hygiene kits and sanitation trainings. But there is still so much to be done, and millions of children to reach. With your help, community-based water solutions, complemented by proper sanitation and hygiene training, can keep more children healthy, and keep more girls safe and in school.