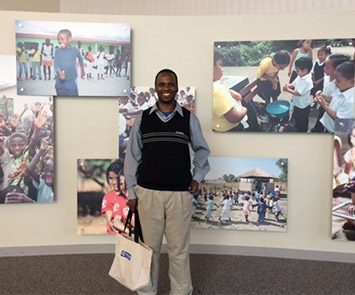 On an ordinary day this past March, something extraordinary happened here at the Plan International USA headquarters. Out of the blue, someone rang the doorbell and introduced himself as a former sponsored child.

What a way to brighten up a quiet Friday!

You might think that we meet sponsored children all the time. But, like you, we know their faces and names though photos, reports, and letters. And like you, we’re excited any time we have the chance to meet a sponsored child in person or to hear firsthand about the impact you’ve made in someone’s life.

Opening the door to David, who started out as a sponsored child in Kenya, was one of those magical moments.

As a little boy in the village of Liburu, David wrote letters to his sponsors, a couple in the Netherlands. Thanks to support from them and other sponsors, every child in David’s community received school supplies like pencils and other writing utensils.

“That’s stuff we take for granted now, but you need it to do homework,” David said.

David was bright. After primary school, he hoped to attend secondary school, but the fees were high. That’s when Plan donors like you stepped in once again.

“I wouldn’t have finished secondary school if it weren’t for Plan,” he said.

Plan donors paid the school fees, and David went on to graduate. Between high school and college, David volunteered at the Plan field office in Maua, Kenya. He helped to sort the mail and translate letters. And he started learning about computers—something that would become a lifelong passion.

David continued on to Nairobi University, where he met his wife, Faith. He started running track and earned a full scholarship to Iowa State University. Today, David has a family of his own, and a PhD in computer technology. He teaches computer information systems at Morrisville State College in New York, where he lives with his wife and two children.

Over the years, David never forgot Plan. He told us that he drove from New York to Rhode Island to introduce his family to the organization that made such a difference in his life.

He smiled and said, “Plan carried me all the way through.”

Donors like you make an impact just like that each and every day. Because of your kindness, your encouragement, and your belief in their potential, children are beating the odds. Even though we may not get to meet them in person, we know that your impact in children’s lives is profound and lasting. Thank you for helping them grow beyond the poverty they are born into and build brighter futures.