Surrounded by nearly one million people, many of whom are strangers, Rohingya girls living in the Kutupalong refugee camp in Bangladesh have had their lives turned upside down.

When Myanmar’s military forced another violent exodus of the Rohingya in 2017, nearly 800,000 people sought safety in Bangladesh, which became home to the largest refugee camp in the world.

For adolescent girls, life in the camp has been challenging. Between traditional cultural norms and a lack of safety, girls are mostly confined to their shelters all day.

In 2018, one year after the crisis began, Plan International visited the camp to better understand girls’ lives. They found that, when girls are given the chance to leave their shelters and fully express themselves, life is entirely different.

Many girls lost family and friends along their journey to this camp, but all of them share the trauma of facing this crisis. And the friendships they formed through their experiences have built resilience and the support to keep their dreams alive. 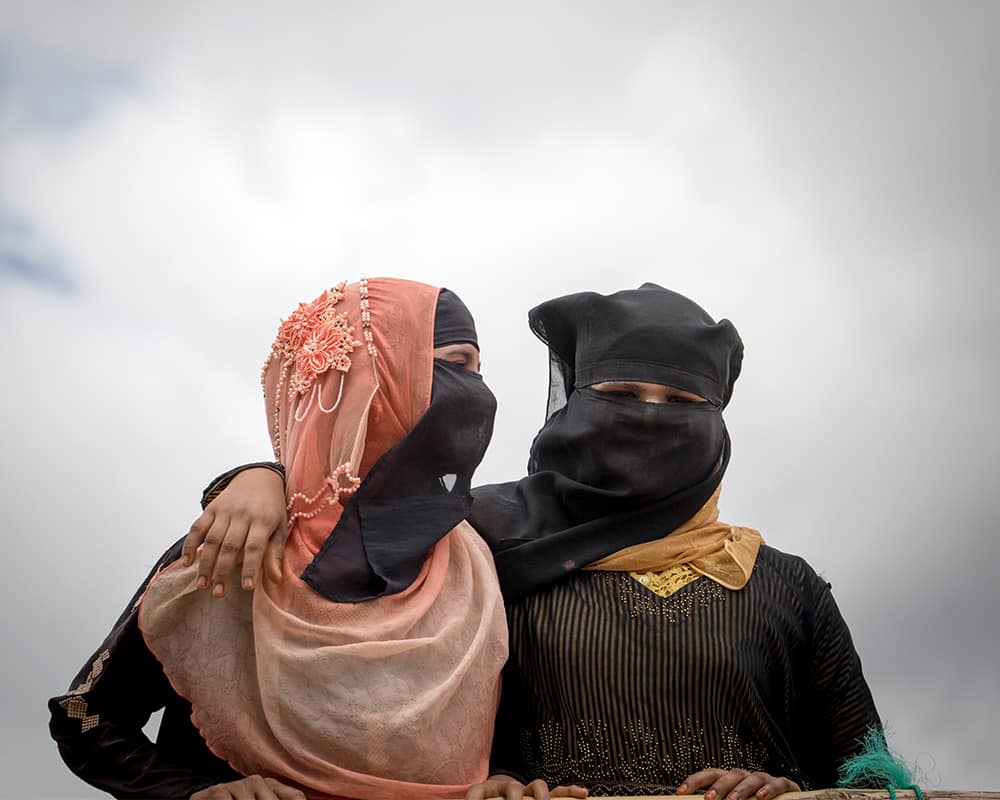 Gulsan and Minara met on a beach while trying to get to Bangladesh in 2017. They were together for just three days before Gulsan’s family were able to cross to Bangladesh, leaving Minara behind.

Neither thought they would see each other again. But when Minara arrived in the camp a few weeks later, she was overjoyed to find Gulsan living just a few shelters away. With 20 camps and hundreds of blocks within each of them, the girls believe that fate brought them together. They’ve been friends ever since. 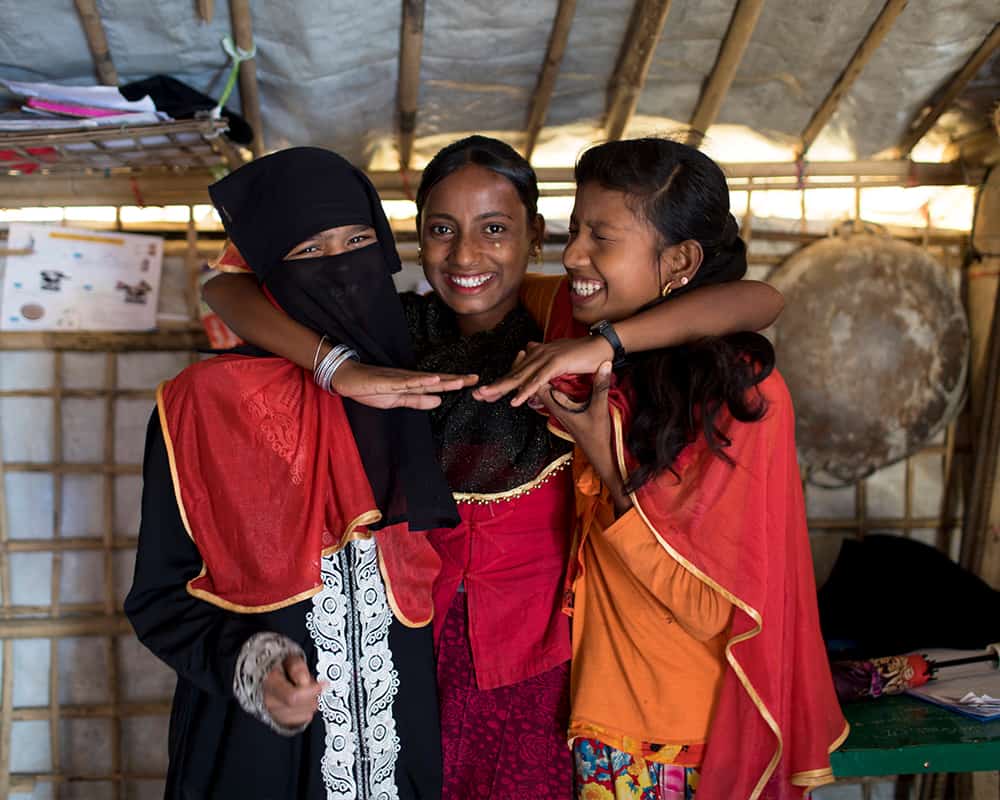 Roshida, Sayeka and Afo Unosrr have been friends since September 2017 and have taken it upon themselves to act as a welcoming committee for new arrivals in the camp.

“They were very nice to me when I first arrived,” Roshida says. “I could not get food as I had only just got here, so they shared theirs with me.”

“We make friends with all new girls when they arrive,” Sayeka says.

“We make friends with all new girls when they arrive,” Showkat Atu says. 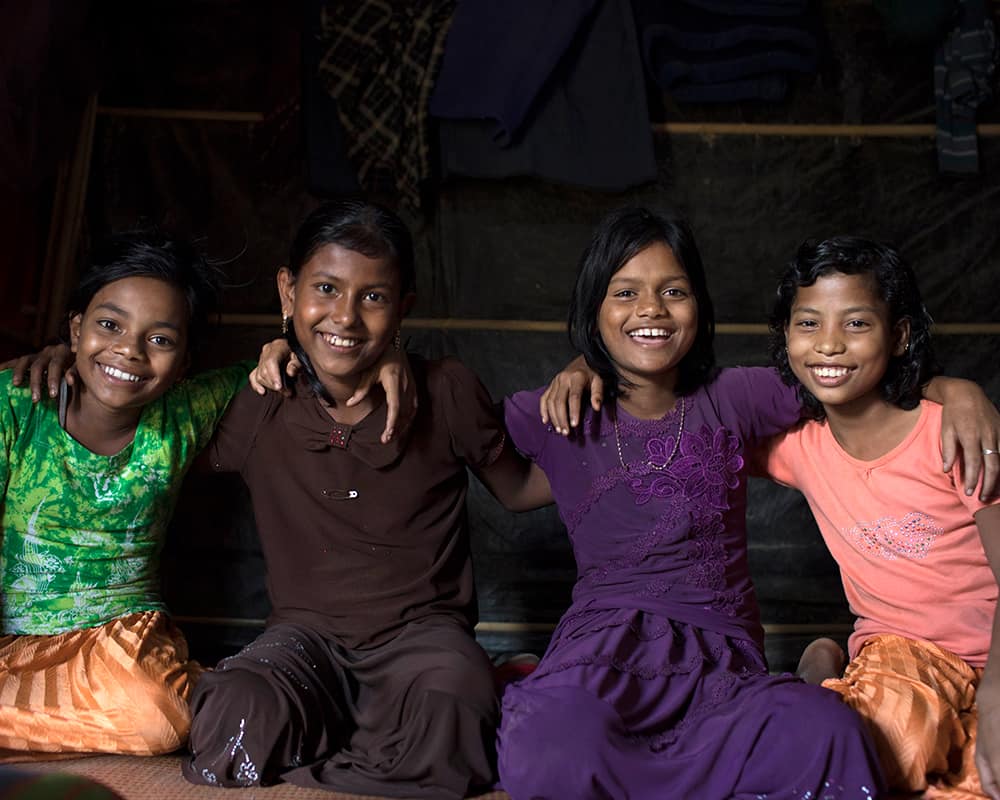 “It is hard when you first arrive, so we help by sharing food and clothes,” Mustakima adds.

The girls have been friends since August 2017.

“We never eat alone,” Tasmin Ara says. “We eat every meal together, no matter what!”

Friendships are vital, especially during challenging times. Research carried out by Plan International has shown that girls with strong peer networks adapt to difficult and adverse situations better than those without. These connections help to remind girls of their own strength and encourage them to keep their hope for a bright future alive. 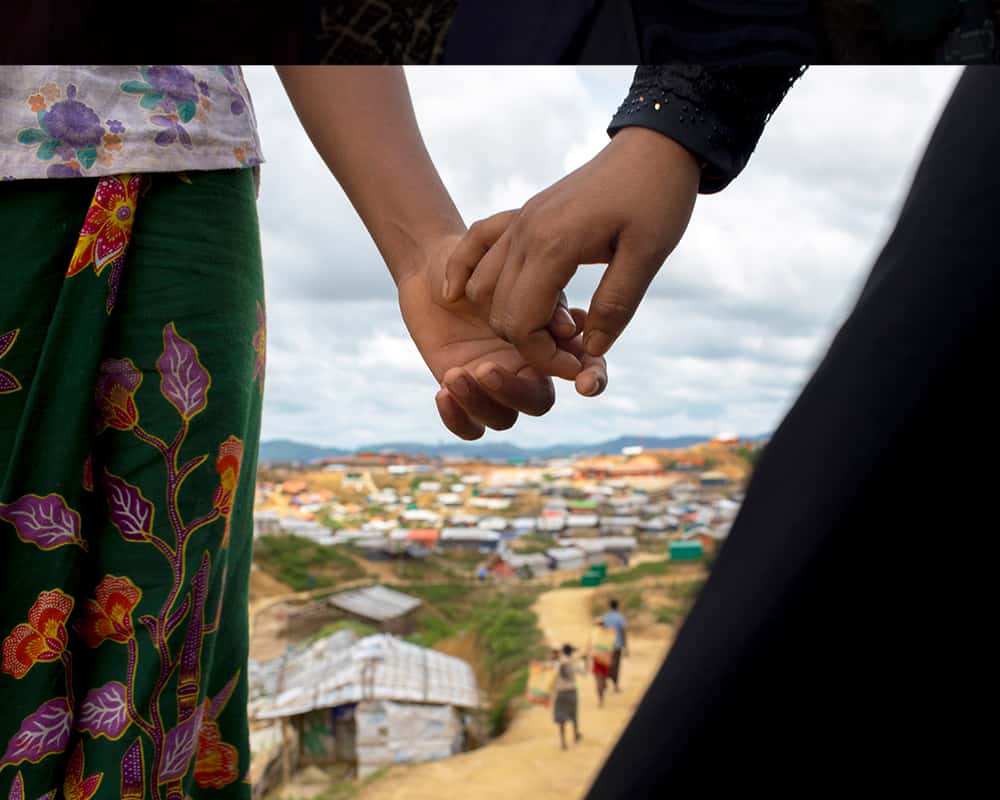 Yet girls also desire formal education, which gives them the skills and knowledge to make that future a reality.

Girls like Rohey a Begum have entrepreneurship on their mind and are determined to open their own businesses.

“I want to be more independent,” Rohey a Begum says. “I would like a sewing machine and training so I can someday set up a business.”

Girls throughout the camp, and other children in Bangladesh, have dreams of their own. They want to learn and build connections to fulfill those dreams. They want to be safe and have access to the tools that will help them fulfill their potential.

By sponsoring a child in Bangladesh, you’ll be supporting them as they grow into adulthood. From teachers and doctors, to business owners and care workers, you’ll help a child gain access to the tools they’ll use to carve their own path in life.

Sponsor a child in Bangladesh