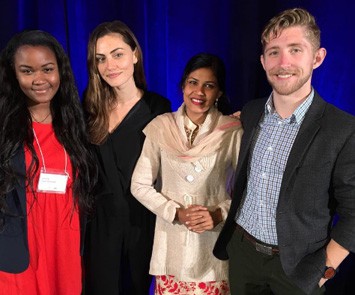 In June, Plan’s newest Because I am a Girl Global Ambassador Phoebe Tonkin was a special guest at FHI 360’s Gender Summit. FHI 360, in partnership with the U.S. Agency for International Development (USAID), Plan International USA, Social Development Direct, MenEngage Alliance, George Washington University’s Global Women’s Institute, the U.S. Department of State and the U.S. Peace Corps, hosted the fourth global Gender 360 Summit in Washington, D.C. This year’s summit was designated as an official side event to the White House United State of Women Summit, which will took place on June 14th.

Phoebe was thrilled to be a part of this year’s Summit. As a Plan Global Ambassador, learning about the challenges and barriers young people around the world face will help raise global awareness of important development issues. Phoebe had the opportunity to meet with and listen to experts from around the world — including youth activists — which will help inform her support of adolescents’ empowerment and leadership, speak out against gender-based violence, and promote a global conversation around solutions to help advance gender equality.