Gladys’ voice is soft and her eyes focus on her feet. It’s nearly impossible to hear her as trucks and cars roar by.

“I don’t mind working for my mother,” she says. “I just don’t like doing it from here.”

She’s working on the side of a loud, busy roadway selling watermelons.

With each new vehicle that whizzes by, she hopes for brake lights. A new customer is literally a lifeline. Her stomach hurts with hunger, and the watermelons she sits next to torment her. They are for selling, not eating.

She’s been there since 5 a.m. and it’s now nearly 8 p.m. Her mother, Christina, had to take on another job today, so 16-year old Gladys had to skip school again. It’s a routine that has become the norm. Christina only earns a small commission from the watermelon stand. The monthly sum adds up to a bag of maize that lasts their family of 12 just one week. When Christina finds extra work, Gladys sits on the side of the road — trying not to look at the watermelons stacked on a table next to her that would be so much easier to eat than to sell. 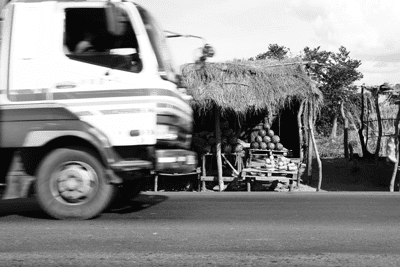 She’d rather be in school.

Her school is an hour and 40 minutes away. On the days when she is able to make the trek, the fatigue and stomach pain from her lack of nourishment make it hard to concentrate in the classroom. On those days, she still needs to help her mother when she returns home. But at least she’s learning — opening doors to a future without hunger, and without worry.

Gladys is like many girls in Zambia. The country is currently facing an acute food crisis, with more than 2 million people facing severe food insecurity after drought and flooding ruined harvests. Children — especially girls — are increasingly missing school, some dropping out altogether to support their families in search of food and water. Many, like Gladys, are working.

The food crisis puts Gladys, and girls like her, at risk. She’s more likely to be married early, forced into labor, sexually exploited or to become pregnant.

Staying in school and well-fed helps, but that’s happening less and less in Zambia. Even in Gladys’ own family, six of 12 children have already dropped out of school.

But it doesn’t have to be this way. Donors like you are supporting emergency feeding programs at schools in the worst-hit communities. With your support, programs like these can help to ensure that girls like Gladys don’t have to miss school in search of their next meal. They’re ensuring that the food on the table will be for eating, not selling.