Learning to Prevent the Inevitable 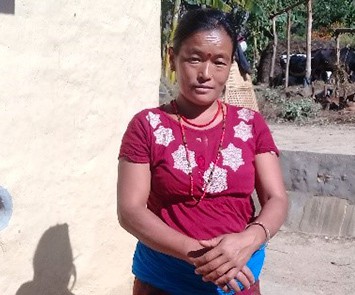 Asha at her home in Garpa.

Asha Thapa feared and expected it every year: an outbreak of cholera and diarrhea that would devastate her family of six, keeping them from work and school, saddling them with medical expenses, and preventing them from investing in their futures. Asha knew too well that each bout of sickness brought with it the threat of death. Only three years before, she had lost both her aunt and sister-in-law.

Asha, her husband, and their three children live in Rolpa’s remote and sprawling hills. The Nepalese district’s relative inaccessibility has exacerbated infrastructural gaps, poverty, and food insecurity. It was also at the center of some of the most intense conflicts of Nepal’s 10-year civil war. While the country has been at peace for more than a decade, residual issues from the conflict still persist.

Until recently, the lack of basic infrastructure in Asha’s village of Garpa was the source of not just sickness, but shame and sadness. Every day, often multiple times, Asha and her family were forced to walk into the jungle to defecate. She would often encounter the elders of her household in the process, cowering her head in shame. Any attempt at privacy, usually by making the same trek through the forest at night, meant probable encounters with snakes, insects, and other animals.

With support from the USAID-funded Promoting Agriculture, Health, and Alternative Livelihoods (PAHAL) program, Asha learned she did not have to accept these grim realities of life-threatening sickness and shame. This realization began when she joined a farmers’ group and was soon elected treasurer. PAHAL’s resilience approach to building food security was evident within these meetings. The groups did not just learn about innovative new agricultural technologies or kitchen gardens, they were also exposed to comprehensive water, sanitation, and hygiene (WASH), as well as financial literacy training. PAHAL integrates these components with others to build communities’ ability to learn, cope, adapt, and transform in the face of shocks and stresses that threaten their food security.

PAHAL is being implemented by Mercy Corps Nepal (prime), two international partners, three national NGO partners, and 14 district based local NGO implementing partners. Plan International is a partner to Mercy Corps and leads the WASH and nutrition components of the program.

WASH volunteers were quick to draw a link between open defecation practices, unfiltered water, and the recurring health issues that Garpa’s families faced. The program claimed the community could nearly eradicate cholera and diarrhea with the construction of toilets, use of purified water, and adoption of improved sanitation practices. As a leader within the group, Asha was immediately convinced, but her constituents were harder to sway.

“We don’t have good houses to live in and also don’t have sufficient food to eat, so we don’t care about a toilet,” her peers would remark. “Why should we have toilets?” 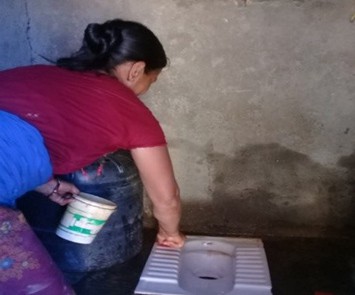 With occasional help from her daughters, Asha regularly cleans the facilities with water and a harpic and brush.

The volunteers listened to these claims and accepted the distrust communities expressed. The drivers of food insecurity are complex, and a series of interconnected, cyclical shocks and stresses often undermine meaningful progress. The immediacy of food and shelter needs can overshadow the need to address the deeper root causes—investments that require time and resources communities feel they cannot give. But the WASH teams were persistent, and their constant presence in the community built trust. Through leaders like Asha, they demonstrated that WASH practices and infrastructure investments paid off over time.

PAHAL also coordinated with the Village Development Committee (VDC) office, which was running a concurrent campaign to provide toilet construction materials such as cement, pipes, and toilet pans. Asha’s husband, Motiram, spent nine days constructing the toilet for their house.

“[Since] two years back, when PAHAL program started working in our village, the occurrence of diarrhea was controlled in my family as well as community,” remarked Asha. “The toilet is very useful for us.”

By embracing educational opportunities, training, and new infrastructure, Asha has shifted the power dynamic within her family. She is no longer trapped in cycles of shame, sickness, and medical debt. She is no longer forced to react and accept the consequences; she experiences the power and dignity that comes with preventing the catastrophic.

Her newfound health, productivity, and willingness and ability to invest in her future will be critical moving forward. Life remains challenging in Garpa, and a myriad of shocks and stresses—from earthquakes and hailstorms to landslides and drought—threaten the communities’ ability to become truly food secure. For the shocks and stresses that cannot be prevented, PAHAL supports integrated activities—like new livelihood training for poultry and saving in cooperatives—aimed at increasing communities’ ability to cope and adapt when disaster strikes.

Written into Asha, her family, and her communities’ brave investments and subsequent progress is the story of resilience. In partnership with PAHAL, they will continue to reveal what works when tackling the roots causes of food insecurity.