Clean water is the key to happier, healthier lives 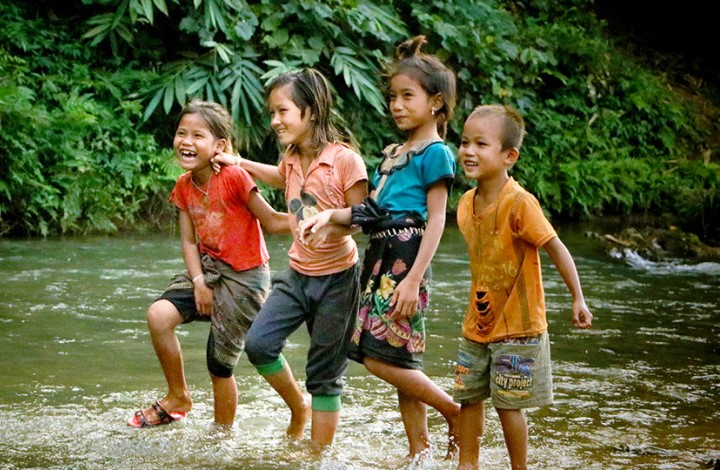 Women and girls living deep inside mountainous areas in northern Laos are almost always solely responsible for the housework. After coming in from a hard day of working in the fields, they have to attend to their daily chores of fetching water, cooking and washing.

In 2013, the Laos government provided a gravity-fed water system for villagers. After a few years, there wasn’t enough water running through the system for their daily consumption, so two open boreholes were drilled in the valley.

But during the wet season, rain washed dirt into boreholes, so the water was often dirty. And villagers felt unsafe using them.

“It was not convenient at all to fetch water from the borehole after coming from the field,” says 23-year-old Nuei. “It was dark and slippery walking for 10 minutes down into the valley. Sometimes my younger sister, who is 9, would help me fetch water after school.

“A few times, my friends and I have fallen on the path,” added Nuei. “Luckily we were not seriously hurt, but we didn’t have much choice until Plan International came to my village. And then things changed.”

In late 2017, Plan started working in the village together with district health partner staff, to identify the needs of children, their parents, village authorities and school teachers.

“We involved young people in the meetings because they needed to know what would benefit them and what they could do to support the activities,” says Heuangphachanh, the deputy chief of the village. “My oldest son and daughter also helped on the water system construction.”

The villagers, Plan and government staff worked together to construct a water system — comprising a water tank, taps and a pipe system that connected a high mountain creek down to the water tank in the community.

The water system is also connected to the local school, which will benefit almost 100 schoolchildren. In the past, they took turns collecting water from the borehole to use in the school latrines.

“During the construction, I worked with other villagers,” says 18-year-old Thien. “We contributed some local materials and labor for the water system construction.”

In April 2018, the new water system was officially handed over to the village. A village water management committee has been set up, which includes seven village representatives who will be responsible for maintaining and operating the system to ensure there is enough water running throughout the year.

Thanks to the new system, every household will soon have its own latrine and be encouraged to use it regularly and no longer defecate in the open. Once these practices and behaviors have been adopted, the village will be certified as an open-defecation free village (ODF village) by the district governor of Houn.

“I feel safer to use water from community water taps,” said Nuei. “It is much clearer. I clean myself and wash my clothes at the tap station. I only bring water home for washing dishes, cooking and household chores.”