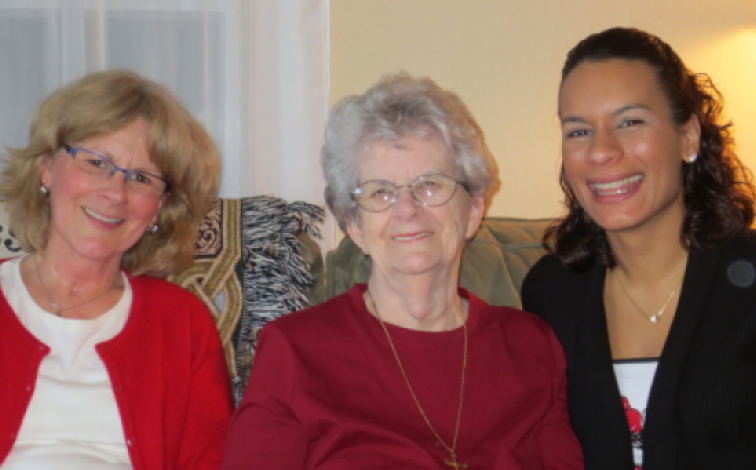 Roberta couldn’t stand to see her mother in pain.

Her natural instinct was to make it better. Her mom hadn’t asked for her help, but she obviously needed it. So Roberta didn’t hesitate.

Roberta’s mother, Janeanne, was hurting because she felt like she was going to have to abandon someone who needed her. Not a family member or a close friend, or even a casual acquaintance. No, this was someone she’d never met, who lived on the other side of the world. But it was a person she’d grown to care about deeply who she didn’t want to let down.

You see, for years Janeanne had sponsored a child from Africa with her church group, but they weren’t sure how long they could continue. They were getting older and simply couldn’t afford it anymore. She didn’t know what to do. But to Roberta, the solution was a no-brainer.

Roberta’s sponsorship experience was something she wanted to share with her own daughter, Catherine. She wanted to instill in Catherine the value of giving back, and to broaden her horizons beyond their backyard. Little did she know that what seemed like a simple decision would alter the course of her daughter’s life. Because for Catherine, sponsorship isn’t just something she does. It’s who she is.

“I think it just became, over the years, a core part of who I am and what I believe in,” she explains. “Commitment to women and girls is a core value of mine. To empower them. Advocating for the underdog or advocating for those who don’t have a voice at the decision-making table.”

Together, Roberta and Catherine sponsored several girls from Africa, like Charity in Kenya, and Martha, Chiletso, and Velesi in Malawi. For Catherine, the experience of corresponding with girls halfway around the world had a lasting impact. Years later, as an adult, she even visited Kenya, the country where their first sponsored child lived. Catherine now sponsors a child of her own — Jaimi, a 12-year-old girl in Nicaragua.

Roberta raised Catherine to be an independent and empowered young woman, and they both want the same for their sponsored children. Mother and daughter agree that education is the key to unlocking a brighter future.

“I would hope that whatever support I give, and that other sponsors give to the community, that it will be enough to provide a safe environment for children to grow, so that they have access to health care and education,” Roberta says. “These children can be empowered, have some control over their lives.”

“The investment in communities over time, particularly the investment in women and girls, that’s critical to me,” Catherine says. “I can see my dollars going to real, sustainable change.”

Over thirty years and three generations later, Roberta and Catherine are more committed than ever. Janeanne passed away in 2015, at age 88, but there’s no doubt how proud she must have been of all her daughter and granddaughter have done to keep this family tradition going strong. And it won’t be ending anytime soon.

“I’ll do it with my children,” Catherine says. “I think in essence everybody should, because it does open your eyes to how we’re all connected.”

Catherine believes this human connection is the heart of sponsorship. “I think it will give you a gift that you weren’t expecting to receive.”