Through sponsorship I can see the strength I have 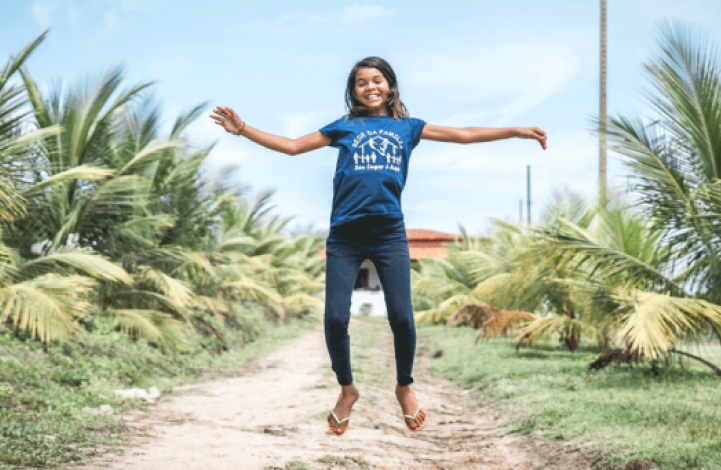 The far corners of Brazil often seem to have been left to their own devices by the public policy makers. This is how it feels when you walk through the dirt streets of this rural community where 12-year-old sponsored child Layza lives.

Here, even the bare essentials are lacking. Nearly 1,000 families live in this community without basic sanitation or access to health care. The education system is limited to just one school, which is unable to meet the needs of all the students.

In this place forgotten by so many, Layza runs down the street with a smile on her face. She cannot fully comprehend the reality she lives in, nor understand how the lack of investment in her community has limited her opportunities for a better future.

The youngest of four children, Layza lives with her parents and 13-year-old brother. Her two elder sisters have already left home. Currently, she attends the local school, which provides the first years of elementary education. But, if she wants to continue her studies, she will have to ride the bus to the city every day. There are no books, libraries, or computers to use.

Despite the uphill struggle she faces, Layza appreciates her home and parents and is happy to live in a place where everyone helps each other.

“If you need something, my community collects some money and buys it,” she said. “Not long ago, we needed a tractor to get through the streets and fix the holes. Everyone contributed, and we succeeded. Everyone lives together, like a big family.”

Layza first learned about Plan International’s work at school, when a community educator invited the students to join the Cambalhotas (Somersaults) project.

The project, which is now present in 18 rural communities in her area, reaches more than 400 girls and boys between the ages of seven and 10. The initiative uses games and educational workshops to help children identify the various forms of violence and abuse they may be exposed to and understand their rights and how to protect themselves.

The Cambalhotas project encourages better communication between mothers and fathers, helping them understand each step of their children’s development, and recognize how violence, even a simple slap, can cause irreparable damage to the formation of an individual.

“This was a very important program for me,” Layza said. “We played, we talked about bullying and abuse. Our trainer always said that we should not do anything that violates our body, that we must protect ourselves, never get into a stranger’s car. Now, I even know how to identify when someone is looking at me in a weird way. I know how to protect myself.”

In addition to self-protection, discussions about human rights and gender equality have helped Layza feel more empowered and able to tackle bullying.

“I like to play football with my friends, but the boys were always making fun of us, saying that football is not a girl’s sport,” she said. “But I’ve learned that we should do whatever we like, that there is no such thing as a girl’s and a boy’s sport. So, my friends and I continue to play, and we don’t even suffer with the bullying. Let’s make them understand that we can do it, too.”

When Layza told her family she wanted to play football, they were very supportive. Her mother also likes football, practices the sport, and argues that women should not bow their heads. They must remain strong and fight for their rights.

Leader of a forgotten rural community

After turning 10 and completing the project modules, Layza had to leave the Cambalhotas project. It was a sad day, but she had learned enough to change her life and share the information she had learned with her friends, her family, and the entire community.

However, her connection with Plan was not over. In the following months, Layza was invited to participate in the #MeninasOcupam (#GirlsOccupy) action, a government initiative that places girls in positions of leadership. Layza occupied the governor’s office, allowing her to observe how politics work in her state and how important it is that more women reach these leadership positions.

“More women need to conquer positions in these spaces, to represent us and show everyone that we have the strength and courage to achieve whatever we want,” Layza said.

Plan’s work with girls like Layza is made possible because of child sponsors, whose contributions help the organization invest in educational and cultural activities for the children they support. Layza’s sponsor family is a Portuguese couple who live in Australia with their two children. In addition to their financial assistance, which makes our projects possible, they also send her letters and toys.

“They are very nice people, very friendly people,” she said. “They take care of me, even from so far away. They ask me if I am studying, they participate in my life. It is very nice to receive care and attention from them as it motivates me to keep going. I want to meet my sponsors one day.”

What about the future?

She wants to go to college, so she can get a job and help other people.

“Plan International has changed my life,” she said. “Before it, I did not listen to anything at school. Now, I have improved my grades, I make my teachers proud when I present a paper, and I have a lot of plans. I consider myself a very strong girl and now I can see the strength I have inside me. I just have to keep moving forward to get what I want.”