Young people celebrate the launch of Safer Cities in the Philippines. Safer Cities is a program aimed at transforming cities into places of inclusion, tolerance and opportunity for everyone.

Plan International (Plan) is committed to transforming unequal power relations between women and men in all that it does. This means that its programming and influencing must aim to change the way women and girls are perceived in society, as well as support the realization of their rights. To support the design and implementation of projects and programs that are gender-transformative, that address the root causes of inequality – social norms, cultural beliefs and values – Plan has introduced the Gender Transformative Marker (GM).

What is the Gender Transformative Marker?

The GM is a tool that helps project designers, implementers, monitors and evaluators review the extent to which programming or influencing work has the potential to contribute to gender transformation and support the inclusion of diverse populations. By assessing projects at different stages of their life cycle – during design, across implementation, in monitoring and at a project’s end – the Marker can help ensure that core elements of programming aim for the transformation of prevailing gender roles and responsibilities.

Water collection in communities around the world is typically the onerous work of girls and women. To achieve transformative change, it is not enough to install water taps close to where girls and women live so that water collection takes less time than if the water source were several miles away. Instead, it is imperative to address the question of why boys and men do not share responsibility for transporting water from its source to the place it is used. That question challenges – with an eye on change – prevailing gender norms.

The GM is designed to assess several aspects of a project including M&E indicators and data, risk mitigation, participation, technical expertise and resources for gender and inclusion work. Other Marker categories focus on gender analysis, which touch upon social norms; girls’ and women’s agency; the condition and position of girls and women; working with boys and men; inclusion and diversity and efforts to improve the enabling environment for these activities. Each of these tool categories has a set of four statements with each statement designed to capture a specific level of gender sensitivity for project work in that category. Levels of the potential for a project category to contribute to gender equality, girls’ rights and inclusion correspond with the four categories in Plan’s Gender Equality Program Criteria framework. 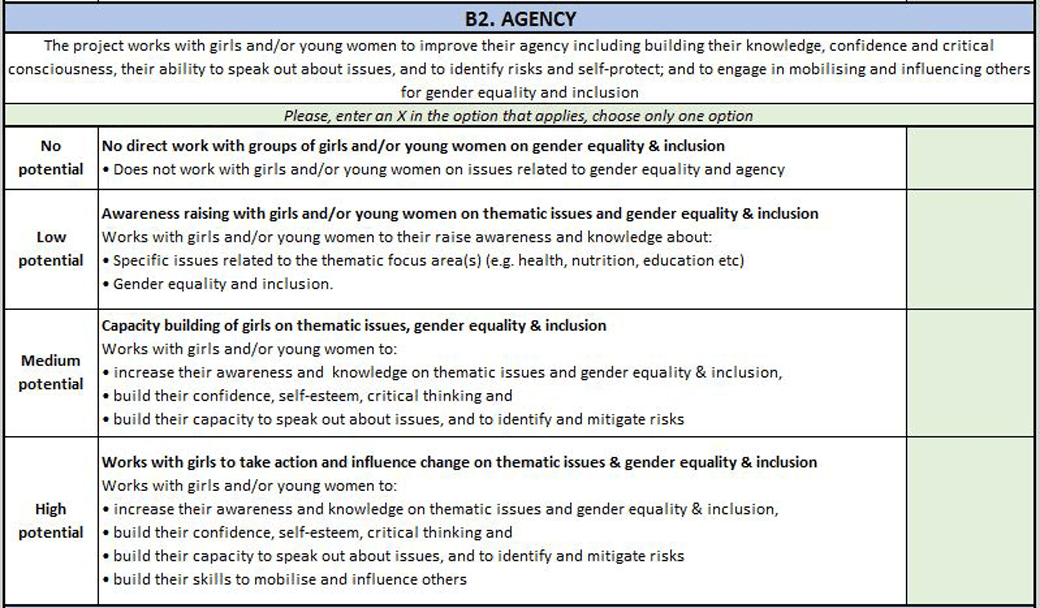 How to use the marker

Tool users mark which of a category’s four statements best reflects the project regarding that arena. A category may be judged “no potential,” which means it is “gender unaware” because it does not recognize gender and exclusion issues and tends to aggravate gender and exclusion inequalities. An arena may be assessed “low potential,” indicating that it is “gender neutral,” since although it recognizes gender equality and inclusion issues in its description, there is nothing in the design of that category of work to address these issues, and thus also tends to reinforce gender inequalities. “Medium potential” categories are “gender-aware” since they seek to improve the daily condition of diverse groups of women and girls by addressing practical gender and exclusion issues – such as lessening the distance to a water point, in the text box above. Finally, “high potential” activities within a category reflect a “gender-transformative” approach, which indicates that for that arena, the project has an explicit intention to transform unequal power relations.

Once all of the categories in the Marker have been assessed, at the click of a button, the tool will generate an overall “score” for the project, indicating whether it is “gender unaware,” gender neutral,” “gender aware” or “gender transformative.” If assessors are satisfied with the project score, they can send the assessment to Plan’s database. If use of the Marker has prompted them to think about ways to increase the potential of the project to contribute to gender transformation, they can enhance the project’s design regarding gender and inclusion and re-assess the project for its gender sensitivity. They then have the opportunity to add the re-scored project to Plan’s repository of scored projects.

The Marker is used by staff and partners from both a field office and fundraising office, working together. For the design phase, often during design workshops, the Marker is a valuable tool for business development teams, to ensure that core elements of gender-transformative programming are embedded in a project. During annual work planning workshops, the review process during implementation can facilitate continuous improvement and reflection, reinforcing a common understanding of Plan’s approach among Plan and partner staff. At a project’s end, key staff members and partners can come together to assess whether or not the work carried out has maximized the project’s potential. Ideally the potential is gender-transformative, with a focus on gender equality, girls’ rights and inclusion as much as possible. Results can be integrated into a final evaluation of the project.

While the GM can support the assessment of a project’s gender sensitivity and hence its potential to contribute to gender-transformative change, the tool does not try to offer a variety of ways to address the gender- and inclusion-related shortfalls that may be identified. That is work staff and partners can do by employing Plan easy-to-use package of Gender Integration Tools at any time in the project, during a project’s design phase and across its implementation period as well.

If you would like to learn more about the GM or Plan’s package of Gender Integration Tools, reach out to Marcia Odell, Senior Director, Gender Equality.

For more articles of this nature, sign-up to receive our From Plan to Action, a quarterly newsletter that highlights the technical work of Plan International USA.