Periods are normal. They can be uncomfortable, messy and inconvenient, but they’re normal. What isn’t normal are the haunting side effects of shame and secrecy.

And what better way to personally fight the stigma than to share my own first-period story here with all of you? Here goes nothing.

I was 10. I had just jumped off the school bus, after another grueling day in the fifth grade. (If you think I’m joking, you must not remember middle school). The bus ride had been the usual 45 minutes of chaos — the kind of anarchy only created when dozens of prepubescent kids are left mostly unsupervised and without seatbelts. It’s lawless. Only the least awkward survive.

Already missing them, I waved goodbye to my friends as if they were departing on a steam engine train bound for destinations unknown. Reaching my house, I let myself in, tossed my backpack and made a quick pit stop in the bathroom. Not a care in the world.

That’s when I saw it. BLOOD. I knew what it meant, but my heart sank. I sat there on the toilet in shock, staring at the red that had soaked through my underwear and onto my favorite pair of jeans. Was this really happening to me? Already?

My mother was sitting on the porch with my grandmother, so I called down to her from the window. When she came in the bathroom, she very sweetly pretended that this was amazing news, and that she was so, so happy for me. I don’t like being lied to, but it did make me feel better. So, if you’re reading this, thanks Mom.

She handed me a pad — a thick, squishy square wrapped in Pepto-pink plastic. We had just been passing these around in health class a few weeks ago after the boys had left the room. I had been just a girl then. I was a mature woman now, with rich life experience, wisdom and a fledgling reproductive system. Unfolded, I swear the pad was suddenly the size of a twin mattress. It felt like it too, as I waddled to my bedroom.

It was not fun saying goodbye to my embroidered bellbottom jeans, though that was probably for the best (I swear they were briefly back in style in 1997). But the worst part was that as far as I knew, none of my friends had started their periods, so I felt like I had this big secret to keep.

In the end, my first-period story was an uneventful one. It’s a familiar rite of passage for many of us — an unexpected blood stain, confusion and cramps.

But for many girls around the world, first-period stories are much scarier. And things don’t necessarily get easier after that first time.

Eunice lives in Uganda. When she got her first period, she had no idea what it was. “I thought I had been stabbed with a needle,” she says. Eunice was afraid to go to school because she thought her classmates would laugh at her, which we all can agree is a kid’s worst nightmare. Her period is still challenging because she doesn’t always have pads. “If there is not enough money, I have to use rags.” 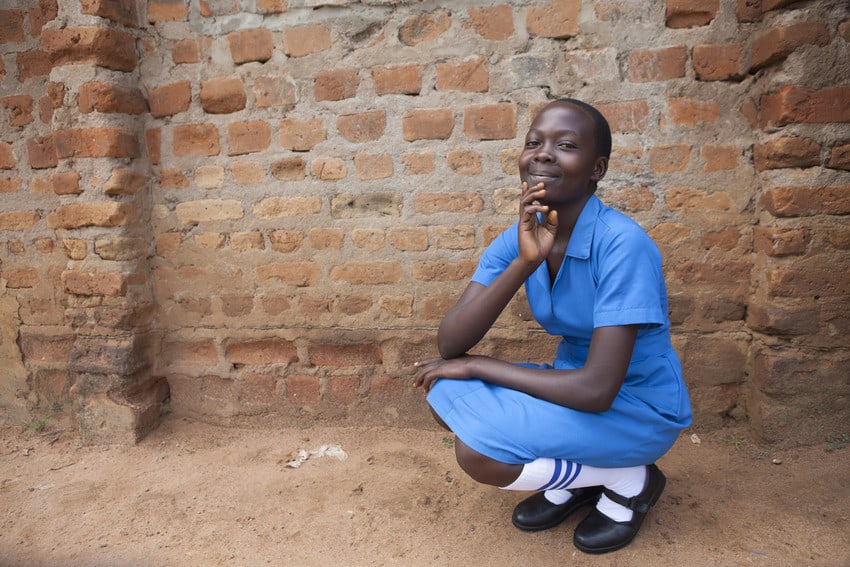 Eunice has to resort to using rags when she can’t find menstrual pads.

Esha lives in India. “When I first started my period, I was too shy to talk about it,” she says. “I used homemade pads — just a piece of cloth. After they were washed I had to leave them to dry in the sun.” When she has her period, Esha misses out on everything. “I’m not allowed to leave home. I miss five to six days of school.”

Trem lives in Cambodia. She was collecting water when her first period started. “I felt panicked and unsure what to do next,” she says. The elders told her to take a bath with special soap, tie her hands with red thread, and stain white clothes with the blood. That was meant to bring good luck, but it hasn’t made dealing with her period at school any better. “I have to go home to change,” says Trem. “Luckily, my home is not far, but others aren’t so fortunate. Some don’t bother coming back.”

No matter where you live, periods are tough. But they don’t have to be like this.

I’ll never forget my first-period story, but you will. And that’s okay. It’s an ordinary story. In case you’re wondering, I did eventually tell some friends, and it was fine. I also mastered the art of smuggling pads into the school bathroom and changing them as silently as possible (another unnecessary anxiety brought to you by period shame). As we all know, that takes some real covert skills.

But please don’t forget about Eunice, Esha and Trem. Because these girls deserve better than rags. They just deserve better, period.

Your turn. How will you help girls fight the stigma and end period poverty?