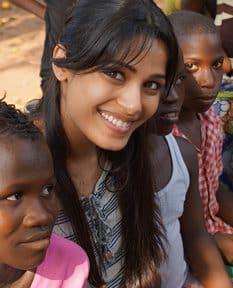 “A fortunate girl from the USA and India should definitely know what a girl from Ethiopia has to go through and if she feels that she has a voice and she wants to put it out there to support these girls . . . then go for it!” – Freida Pinto

After becoming a fixture on the big screen with the critically and commercially acclaimed “Slumdog Millionaire,” Freida Pinto has quickly become an international film star and household name. For her role as Latika in “Slumdog Millionaire,” she was nominated for “Best Supporting Actress in a Motion Picture” at the 2009 BAFTA Awards. The movie itself won eight Academy Awards, including “Best Motion Picture” and had another 100 wins and 51 nominations.

In addition to Freida’s successful acting career, in July 2012 she joined Plan International’s Because I am a Girl campaign as the organization’s global ambassador. Because I am a Girl is Plan’s global initiative that creates sustainable projects in developing countries to give girls access to clean water, food, health care, education, and protection from violence and exploitation. Freida has traveled with Plan to Sierra Leone, India, and Ethiopia to witness firsthand how investment in girls can transform a community. She has also visited the Philippines to see how communities are rebuilding following the devastation of Typhoon Haiyan. As the face of Plan’s Because I am a Girl advertising campaign, Freida is advocating for the rights of women and girls around the globe to claim a brighter future.