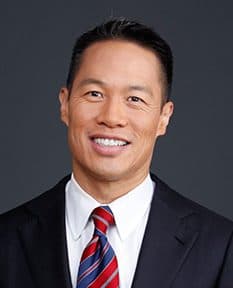 Richard Lui is an American journalist and news anchor for MSNBC and NBC News. Before MSNBC, he anchored for five years at CNN Worldwide, where he solo-anchored the 10 a.m. hour of “Morning Express.”

Richard has been active in community leadership for more than 25 years in Africa, Asia, Europe, the Middle East and the U.S. In recent years, he has spent on average 50 days a year volunteering at events around the world. Currently, he is an ambassador for Plan International, the Epilepsy Foundation and APIASF. He has served on boards involved with affordable and homeless housing non-governmental organizations, and has been reporting and speaking on human trafficking for a decade. The NAAAP 100, WWAAC 100, YUE Power 100 and OCA Pioneers are among the organizations that have honored him with community service awards. Richard speaks frequently, including at events hosted by the UN Foundation, U.S. State Department, Harvard and the Aspen Institute. He is also an active columnist, writing on community issues domestically and internationally; his work has featured in publications including The Seattle Times, Detroit Free Press, San Francisco Chronicle, USA Today and Politico. In 2020, he directed the film “Skyblossom: Diaries of the Next Greatest Generation.”

Before journalism, Richard spent 15 years in business with Fortune 500 and technology companies. This included work at Oliver Wyman, and patenting and launching the first bank-centric payment system in a Citibank carve-out founded with fellow University of Michigan MBA alumni. He still holds the patent. Business Insider recognized him as one of 21 successful business thinkers, alongside Warren Buffett, Marisa Mayer and Mark Cuban.

Richard graduated from UC Berkeley and earned an MBA from the Ross School of Business at the University of Michigan. He has worked, lived and studied in Europe, Asia and the U.S., where he currently resides.

In 2013, Richard joined Plan International USA as a Global Ambassador and champion for the Because I am a Girl campaign. He has visited Plan projects in El Salvador, Peru, Paraguay and Nepal with special interest in microfinance, gender equality and child protection programming.