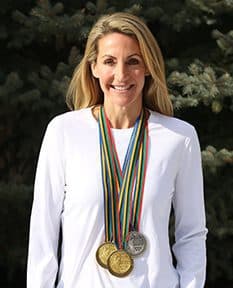 Born and raised in northern California, Summer spent most of her childhood in swimming pools. Inspired by her brother Trevor, she joined a swim team called Sugar Bears at four years old and never looked back — although, she did cry on the blocks of her first race. But from that first race, she learned to push through the fear in order to truly feel the accomplishment. And that feeling became her motivation for every facet of life.

Summer went on to earn a swimming scholarship from Stanford University, as well as back-to-back National Collegiate Athletic Association (NCAA) Swimmer of the Year awards in only two years as a collegiate swimmer. Her prize accomplishment was being a part of the 1992 National Championship team with Stanford. That summer, at the 1992 Olympic Games in Barcelona, Summer emerged as the most decorated U.S. swimmer, winning four medals – two gold, a silver and a bronze. And it was soon after that she shifted her passion to television.

Her now 25-year television career began with CBS Sports and MTV, hosting a show called “Sandblast.” She has gone on to work for every major network and news program, including NBC’s “Today” show, “Good Morning America” and “Rachael Ray,” where she was a special correspondent. She was also the co-host of “NBA Inside Stuff” and the host of the cult favorite ‘90’s game show, “Figure It Out,” on Nickelodeon. She has worked nine Olympic Games as a commentator, reporter and host. She hosted Fox’s reality show “Skating with Celebrities” and “The Sports List,” and was a part of Lifetime’s groundbreaking WNBA broadcast crew including Michelle Tafoya, Reggie Miller and Meghan Pattyson. She had the guts to enter the world of reality television as a contestant for her charity, Right To Play, on “Celebrity Apprentice” and “Rachael vs. Guy: Celebrity Cook-Off.” She is currently a co-host of CBS Sports’ award-winning show, “We Need To Talk.”  She is also the author of “Champions Are Raised, Not Born: How My Parents Made Me a Success.”

On the personal side of life, Summer’s proudest titles are that of mom and wife. She is married to a fellow Olympian, from the frozen side of water, Erik Schlopy, who competed in three Olympic Games in alpine skiing. And together they have two kids –  Skye, age 13 and Spider, age 12. The question that Summer is most asked is not, “What was it like being in the Olympics?” but rather, “What will your kids be, skiers or swimmers?” But they are fully aware that the answer to that question is out of their hands.

Summer is incredibly passionate about giving back and has been a part of Plan International for over 10 years now as a supporter and sponsor. She also visited Plan’s Champions of Change programs in Uganda in 2020.