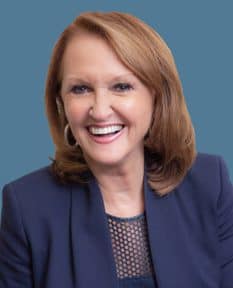 Vicki has led a variety of business transformations focused on growth and value creation, both domestically and internationally. As Delta Air Lines’ Chief Marketing Officer (CMO), she directed global reengineering of the company’s post- 9/11 flight schedule, dramatically reducing costs and the temporary footprint of the airline, while stabilizing revenue, customer satisfaction and employee morale. She also joined other airline executives in a Senate hearing to obtain $15 billion of relief for the aviation industry.

Vicki spent 28 years at Delta and ran the majority of the airline’s operations for 10 years, including 203 airports, inflight services, call centers and cargo operations. While serving as CMO, she saw a total transformation of technology, including the start of delta.com and an extremely successful loyalty program with American Express.

Previously, Vicki served as Global CEO of Opportunity International, where she led initiatives to create a long-term strategic plan, streamline operations and increase global fundraising. She also strengthened partnerships with institutional donors as a part of the organization’s plan to create 20 million jobs by 2020.

Prior to that, Vicki was President and CEO of Feeding America, the nation’s largest domestic hunger relief organization. In that role, she led a rebrand of the organization, increased fundraising and grew the organization to become the third largest nonprofit in the U.S.

Vicki has extensive private sector board experience, including serving as a director for A.G. Edwards, HealthNet, Centene Corporation and DocuSign, along with many nonprofit boards. She has received numerous awards, including C200’s Luminary Award for recognizing the role education and training play in helping people secure employment, as well as the Four Freedoms Award from the Roosevelt Institute, which honors people who embody Franklin Roosevelt’s vision for democracy in their life and work. She is regularly featured in The Wall Street Journal, The New York Times, Forbes, Bloomberg and other media.