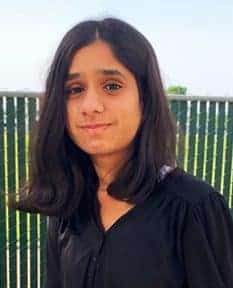 Vishwa is an undergraduate at Yale University, where she studies cognitive and political science. She is interested in international law and is a board member of the Yale Review of International Relations and the Yale Human Rights Journal. Outside of school, Vishwa works with STAND USA. She has interned for State Senator Connie Leyva and Congressman Gil Cisneros, and was recently appointed to the Asian American Advisory Board for a state office election. She is the founder of Future Politico-Economic Girl Leaders, a nonprofit that encourages young girls in South Asia to become politically engaged.

A member of Plan International USA’s Youth Advisory Board since 2019, Vishwa is currently helping to lead the Public Engagement and Advocacy Committee. She has represented Plan at NBC Universal’s International Day of the Girl Event, as well as events with The Female Quotient, on Capitol Hill and with DoSomething Strategic.